In 2011, the singer-guitarist Habib Farroukh met drummer Marc Dupont and travelling companion, bassist Clement Vallin. Through the wild jam sessions set up in numerous squats and concert across Paris, a strong bond formed between these three musicians from the west, guided by their love for adventure and groove.

At the crossroads where Maghreb folk, soul and Afro music meet, the music of Bab El West (“the West Gate”) took shape in 2012. Playing equal parts traditional and modern-day music, the trio coalesces around guitarist Hamza Bencherif, who lends his blues rock touch, and Nidhal Jaoua, a virtuoso on the qanun, the eastern ancestor of the harp.

To wide acclaim from both the press and public for their first album Douar, released in 2017, Bab El West returns to the source: the road. Two years touring and nearly a hundred concerts later, the band recorded Houdoud, an ode to life on the road and all their latest encounters, slated for release on November 29, 2019.

“The word frontier is a one-eyed word, humankind sees the world with two eyes”. This quote from Eluard serves as inspiration for Bab El West‘s new album, Houdoud. “Houdoud” means “frontier”, where worlds join together, while also marking their limit: joyful and threatening at the same time, complex and dual-fold in nature.

Their first album, Douar, meaning “the village”, earned critical acclaim, won the SACEM prize for self-production and laid the foundations for an imaginary village, the cradle of the band and its roots. Houdoud, for its part, is steeped in asphalt, celebration and cross roads. Having ripened while on the road, it bears the imprint of the music scene and their fruitful encounters: with the talented Shiels, former members of the Irish band Sons of the Desert; the ever-present side man Yannick Jory, a Breton saxophonist with gypsy inflections; and Jean-Luc Thomas, an exceptional flautist in the Breton tradition, with African, Arabic and South-American sensibilities.

From stopover to stopover, Celtic influences mingle with the Chaabi and Gnawa sounds of North Africa, from which the band drew when recording Houdoud, the ever-changing frontier. Behind it all, a common heritage: rock, pop and Afro music.

The sound engineer Leo Fourastie set up a mobile studio in a large wooden building on the banks of the Jaudy estuary in the Cotes d’Armor, the band’s historic stomping ground. The live recording of all the tracks, from voice to percussion, lends the album its cohesion and unique warmth.

Deeply organic and by turns a poetic western, a fable, a quest story, Houdoud leads the living through catchy melodies to the outer reaches of human, animal and plant worlds. 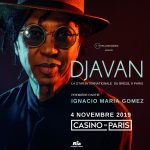