Les Fils Canouche will unveil their new album « Nagori » on its digital release April 29 and physical release May 20, 2022 on Vlad Productions / InOuïe Distribution. This new work will be presented live on stage on Thursday June 16, 2022 at Studio de L’Ermitage (Paris).

An original, obsessing and grandiose approach of world music. Both familiar and baffling : Les Fils Canouche break the codes. These exceptional musicians bring their different universe and avant-gardist talent in an atypical mix not to mention their outstanding composition. Striving to explore acoustic energies the band concentrates on World Music, Gypsy Jazz or Latin Music.

With very special guests, Minimo Garay & Javier Estrella with the percussion instruments, Mohamed Abozerky & Hussam Aliwat with the oud, Les Fils Canouche open now the gates of world music and naturally change the Oriental, Gypsies or Latin sonorities. Everything is meant to reach out to people’s heart, a sweet reflection of Hyang-Hi Kim’s painting used as the main cover of their album.

Mixing up various styles and breaking the codes of World Music is a sheer goal upon this 6th album. Entirely recorded in Paris during a situation of health crisis, it did not prevent the band from creating to give every song a taste of magic and merge of styles.

Creativity and great talent explain how Les Fils Canouche are able to give a whole artistic universe that knows no limitations and that pushes to passion and curiosity. 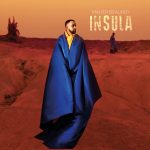